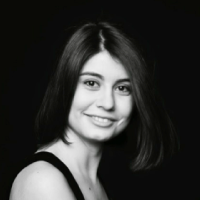 After completing her bachelor’s degree at the Department of Economics, in Boğaziçi University, she started to work at the production and coordination departments of Nar Film. She has served as co-ordination and marketing officer in the festival process of Özcan Alper’s third feature, ‘Memories of the Wind’.

Her first production experience was Kivanc Sezer’s debut feature “My Father’s Wings”. In addition to be executive producer of and festival coordinator of this film, she has been involved in projects such as production, project development and funding for two years on freelance projects.

¨Finish¨ is her first solo producer performance and with this project she became the winner of ‘!f Yapımlab’, which was a part of !f Istanbul Independent Film Festival.

In the beginning of 2018, she founded Surrealland in order to produce the independent feature films and documentary projects of young film-maker’s of Turkey.

Aluçlu is an alumnus of Sarajevo Talents 2019.

She is a member of The European Women’s Audiovisual Network and WMC – Women With Movie Cameras in Turkey.

Aycan Aluçlu is still working on cinema projects and also she works as Finance Coordinator in Cinema and Broadcasting Workers’ Union of Turkey.